the mari family, living in this place since 1844, has its origins at the carmignano castle, as one of the "dodici famiglie di parentado"

Adriano Mari (1813-1887), of ancient tuscany family, famous juriconsult and protagonist of our Reinassance, created Terenzano's estate in 1844. From that time the Terenzano estate's speciality is the coltivation of the olive tree and the production of a olive oil that quality is guranteed from factory's olive-mill, to be able to processe the olive-harvest imediatly after then beating olives down.

According to the Repetti's "Dizionario geografico Fisico Storico della Toscana" (Firenze 1843 vol.V pag.508), the origin of the name TERENZANO has to be found in the land owned by the "gens Terenzia" of the Roman age. Another playful hypotesis suggests a derivation from the name "TERRENO SANO (healty ground)", meaning the fertility of the ground. 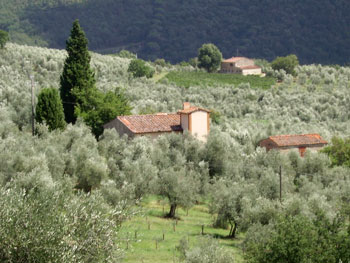 The Repetti reports a document of the year 1140 about a man who renounced to all his rights on some properties located on Terenzano. On Terenzano also Carocci's "I dintorni di Firenze", (Firenze 1906vol.I pag.20 and following). Until recent times the Terenzano area was organized as parish, with a church dedicated to S.Martino. The church was built in 1200 but renewed inside in 1700: it contains a huge wood crucifix attributed to Giambologna.

Aside of the church the Palagio della Rosa, home of the Lord of the Gherardini Family since 1300. A Francesco di Matteo, member of this family, was awarded by Pope Martino V of the Rosa d'Oro (Golden Rose). This fact was recorded in the names both of the villa and of a road who crosses the area.

Above the church we find a tower, formerly an house-tower of the family Alberti Ristori, then reduced by the Ghibellinis after the Montaperti battle in to a farmhouse (1265).
Also important the villa of Bagazzano, with a loggia attributed to Vasari, formerly Medici's hunting house.

The Mari Family, living in this place since 1844, has its origins at the Carmignano Castle, as one of the "Dodici Famiglie di Parentado" who represented the leading authorities in Carmignano since its foundation in sec.XIV ("Inventario dell'Archivio Preunitario di Carmignano", edited by E.Insabato and S.Pieri, Firenze, All'Insegna del Giglio, 1983).

The Mari's entered administrative positions during the Granducato di Toscana, were recognized in the Nobilta' di Pisa (Archivio di Stato di Firenze, Nobilta' e Cittadinanza Toscana, filza di giustificazioni XXX, 17) and in the Nobilta' di Firenze (ASF, Nobilta' e Cittadinanza Toscana, filza di giustificazioni, LXXI,9). We find them with Cosimo(1716-1824) Gonfaloniere di Pisa and Chamberlain of the King of Poland Stanislaw Poniatowski; Lorenzo Mari (1766-1824) was a cavalry officer who leaded the 1799 anti-French insurrection known as "Viva Maria"; Adriano Mari (1813-1877) was a patriot and a famous lawyer, President of the Camera when Florence was Capital, Ministry of Justice under Mr.Menabrea and Senator; Marino Mari (1890-1944), grandson of Lorenzo, one of the Florentine leaders of the liberal antifascism, died in the lager of Mauthausen. 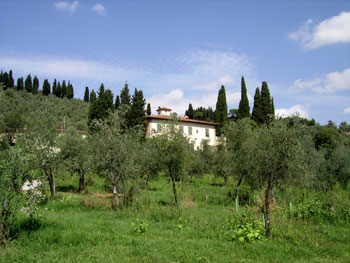 The first nucleus of the Fattoria di Terenzano was acquired by Adriano Mari in 1844. Thanks to further acquisitions the farm developed to an area of 92 hectars and 12 fields, almost the whole territory of the Terenzano parish. The creation of such a vast property was quite typical for these days: in the same period in the same Comune of Fiesole the noble Englishman John Temple Leader (1810-1903) created a sort of feudus of 280 hectars with 26 fields, 9 villas, a monastery, and the ruins of a castle. 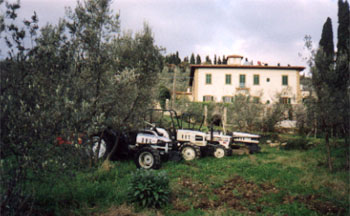 The property of Terenzano was later divided among the heirs and therefore reduced, until it passed to Marino Mari. During the 30s' he was forced by the fascism to leave the active politics and therefore could dedicate himself to innovation in agriculture.

Thanks to his efforts, in that period Terenzano was often awarded first prizes in contests among the small farms of the surroundings of Florence. Today the Terenzano farm occupies 42 hectars - of them 38 with olive trees and 4 with forest.